Merry Meet! I am Lady Kaleah (e-mail ladykaleah@sacredcrossroads.com), Wise Woman and High Priestess of Sacred Crossroads Coven. I am, first and foremost, wife to my wonderful husband of almost 40 years — our High Priest Dagda — and also mother to two incredible, grown children. Although I am now retired from my profession as an interior designer, I still maintain an interest in feng shui and the creation of healing environments. I now enjoy being a full-time witch, tending my rather large garden, teaching, writing and fulfilling the duties of running Sacred Crossroads Coven.

I first found my way to this magickal path many years ago through a study of hypnotherapy and experimenting with trance states. I learned to connect with the divine via my subconscious mind. I had one of those “aha” moments and suddenly my spiritual path became very clear to me. I continued my study of hypnosis, becoming a Certified Hypnotherapist, not beginning a private practice, but choosing to use my knowledge to increase the success of my magickal work.

I’ve been involved in the Craft for over 20 years, first as a solitary, then as an eclectic witch involved in the local pagan community. I am a graduate of the Earthwise “Woman WisdomTM” program. After I had begun my training in Boston, I was asked to begin teaching a Wicca 101 class at a local Pagan shop. Some of these first students waited for me to complete my training so that we could begin a coven together.

After working first alone, then in the eclectic local pagan community, it became clear to me that I wanted to work in a Tradition that was older, more structured and was one of the traditions that was the foundation for the many eclectic covens that were springing up. I wanted to be a Gardnerian Witch. I searched for a long time to find a Gardnerian coven in the Philadelphia area but found that at the time, there were none. So through networking, I found a coven in Boston Massachusetts that taught British Traditional Witchcraft, a mixture of Alexandrian and Gardnerian Wicca.

I began my training in Boston via phone, hundreds of emails and a trip to Boston once a month to circle with what had become my coven up there. This training continued for a full three and a half years. I learned about the roots of modern Wicca and experienced how the Craft was practiced by Gerald Gardner, Alex Sanders, Doreen Valiente and the others who were responsible for the preservation and revival of our religion. In Boston, I learned a lot about Traditional British Witchcraft, but at the end of my Craft training, it was a valid Alexandrian third Degree which I
received.

With feelings of both joy and sadness, I hived from the coven where I originally trained. I then formed the Sacred Crossroads Coven in Wayne with my husband, Dagda, who eventually became my High Priest. We practiced for many years as an Alexandrian Coven and were successful in our magick, contacted deity together and loved one another in perfect love and perfect trust. Our coven has been in existence for many years and although members have come and gone, we have remained a group with true caring for one another. But we still yearned to be Gardnerians.

Shortly thereafter, Dagda and I found a Gardnerian coven, also in Boston, and decided to retrain as Gardnerians. Once again we trained via email, phone and monthly trips to Boston. In the end, we received our valid Gardnerian Third Degrees. We were thrilled. We retrained our coven and now we practice purely as a Gardnerian coven. Now when we cast an initiatory circle, we know we will be casting a circle that will carry with it a precious and valuable legacy.

There is one piece of my story that I can’t leave out because it means so much to me. I had several people leave my coven to form their own covens. It is called hiving off. This is both a sad and joyous thing as it is how the Craft continues to grow. After I had hived the required number of covens I became eligible to become a Witch Queen, the highest level of Witchcraft there is in Gardnerian Wicca. Everyone came to the ritual, including all my local covens, my former coven in Boston, a covenmate from Boston who has since moved to northwestern, PA and two folks from my coven in Topeka, Kansas.

They performed for me the most beautiful ritual I had ever been a part of. After the ritual they gifted me with a traditional garter which had a beautiful buckle on it for each of their covens. It is the most special thing that has ever happened to me in the craft. We cried and hugged for a long time.I continue to lead Sacred Crossroads Coven along side my husband, Dagda, with the help of all the coven members, especially Réalt, the Coven’s, Maiden. I couldn’t continue as I had been without their help and it is greatly appreciated.

Sacred Crossroads Coven is open to new members who have taken our course and show that they are truly interested in practicing the Gardnerian Tradition. The coven members must feel that it will be a good fit and that they could love you in perfect love and perfect trust.

Well, that is the story of my magickal path. I know it was a long story, but I enjoyed sharing it with you. I hope in some way you have been inspired by it. 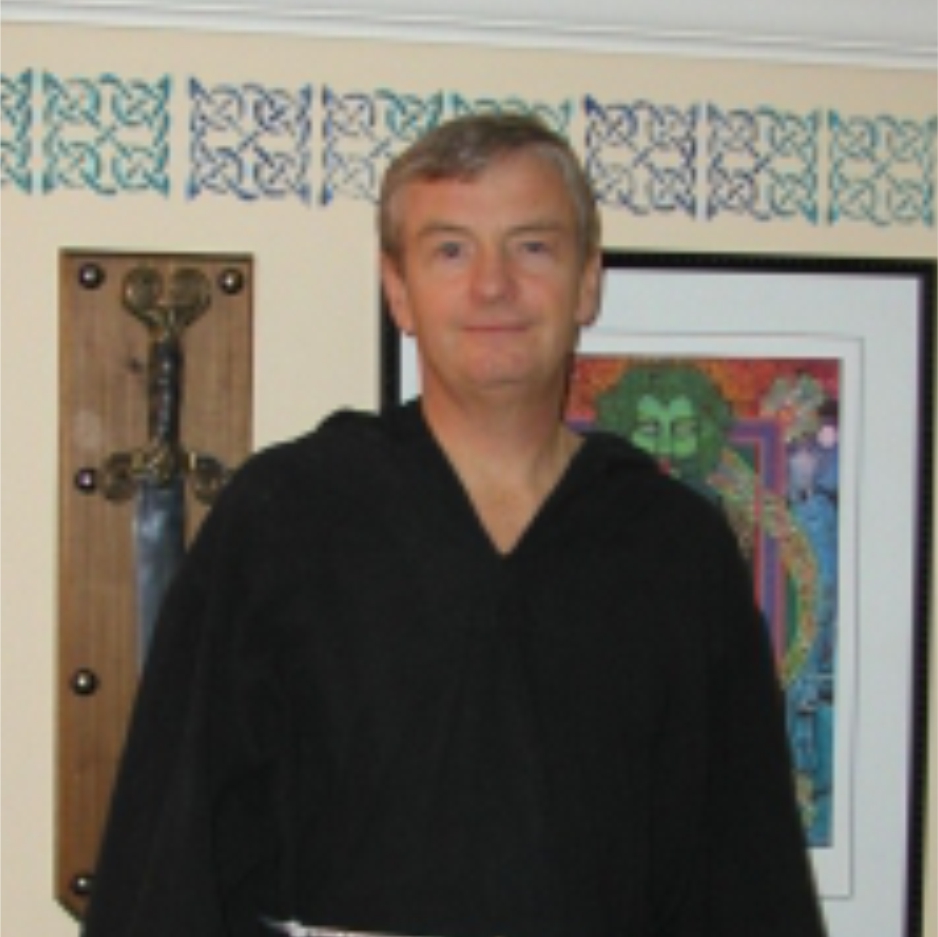 I am Dagda (e-mail dagda@sacredcrossroads.com), High Priest of Sacred Crossroads Coven, and husband to Lady Kaleah. I was born, raised and educated in the Philadelphia area. My spiritual upbringing was Roman Catholic. In elementary school I started to question the teachings of the Catholic Church. I was not satisfied with the answers and the church lost most of its credibility with me. Soon after high school, I married my lovely wife and
together we raised two wonderful children. During this time we were involved in a constant search for a spiritual home. When my wife found Wicca, I was supportive of her spiritual practice, but feeling very cautious, I made myself content to listen to descriptions of her spiritual journey. Eventually I decided to proceed very slowly down the Wiccan path and found that I could easily embrace the beliefs of Wicca. I discovered the joy of sharing a spiritual path with my wife and became one of the founding members of Sacred Crossroads Coven.

In my mundane life, for a profession, I work in the business world in sales, and for fun I play golf. I am often teased about chasing a little ball around, trying to get it into a hole. However, I find that playing golf combines competition and personal challenge with being in the great outdoors, surrounded by nature. What could be better?

We travel to Ireland every other year to visit my family. Perhaps my Celtic roots have much to do with my love for Wicca. I have heard many stories about my grandmother that tell me she had a little bit of witch in her and I guess some of it rubbed off on me

Bright Blessings. My name is Sage. My interest in Wicca began in 1984, when I was 14 years old. Prior to this, I was completely fascinated by the traditions and ceremonial aspects of my Catholic
faith. As I entered my adolescent and teenage years and began to lose interest and faith in my Catholic upbringing, I discovered Wicca and began to read and research. I knew deep down, something about this religion just felt right and hungered to learn more.

Different life events, however, sidelined my pursuit of Wicca. As a
teenager, I discovered the wonderful freedoms a driver’s license
could provide. In between my Junior/Senior years of high school, I
attended Army basic training. In 1989, I began my first “real” job
and eventually began working and attending West Chester
University…both on a full time basis. In 1996, I was married and
soon started my family. From 2002-2005, I attended the University
of Pennsylvania…working towards my Master’s Degree.

In 2012, the spark I had felt toward Wicca as a teenager, began to
ignite my desire to once again pursue this faith. After conducting
research about local Covens and Wiccan paths, I became
completely taken by the traditional Gardnerian path. I made initial contact with Lady Kaleah and expressed my
interest in learning. Due to family circumstances, I lost touch with Lady Kaleah until I again made contact with her in
late June, 2013. This time, however, we set up a face to face meeting at the Covenstead, where we talked at great
length about the above described life events and my renewed interest in Wicca…Gardnerian Wicca to be more
specific.

In August, 2013, I became a Student in Lady Kaleah’s Wicca 101 and learned a lot (enjoyed it as well). The 101 course was immediately followed by a British Traditional Wicca course, which I found equally stimulating and fun. During this time, I had the opportunity to become involved with the local Pagan community. I began attending Open Circles at the Inner Path and got to know and become friends with many outstanding people. At the conclusion of the British Traditional Wicca course, I made the decision to formally petition Sacred Crossroads Coven. In July, 2014, I became a Dedicate to the Coven…this is the step before actually becoming an Initiate. On January 4th 2015, as the moon was full, I was formally initiated into Sacred Crossroads Gardnerian Coven, where I will continue to build on the foundation of knowledge which has already begun. 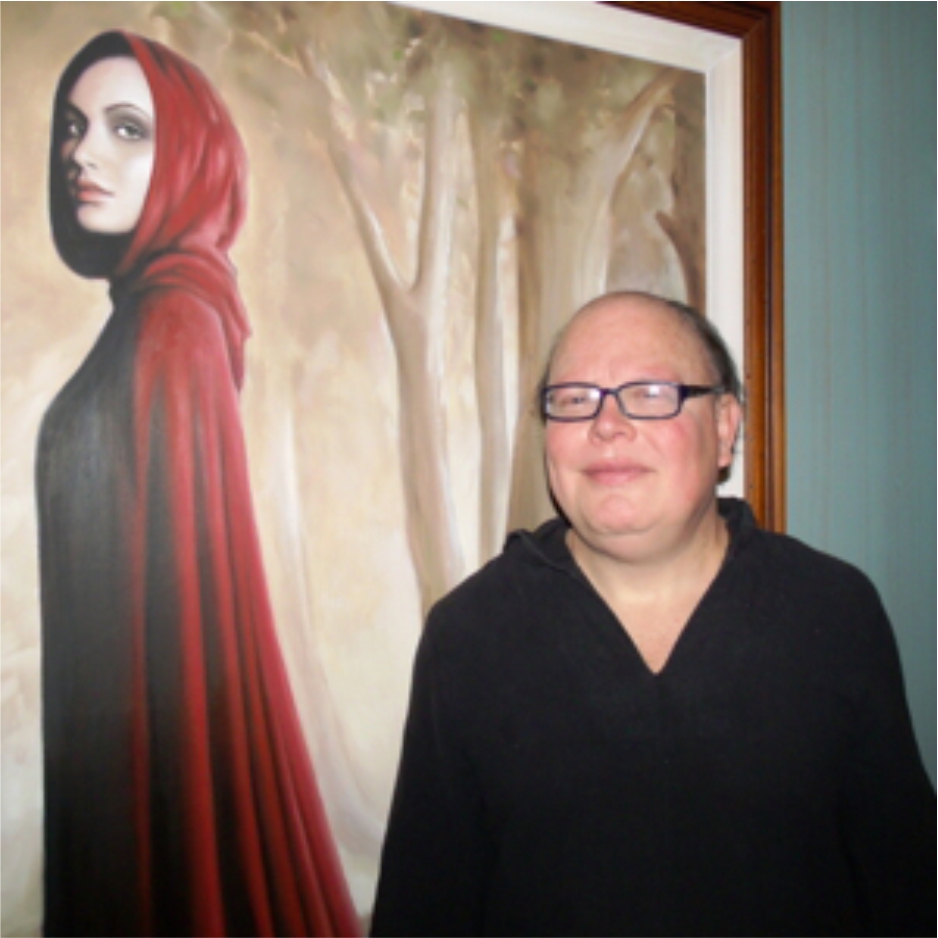 Merry meet everyone. I am Sunflower, and my magickal journey
to Wicca began a number of years ago when I started seriously
practicing as a solitary and worshiping the Lord and Lady. As a
child, I grew up Roman Catholic and found the divine through the
sacraments, especially Holy Communion; however, I felt that
something was missing — the divine feminine — in my belief of
the godhead. Over time, I lost my numinous feelings about
Catholicism and eventually stopped going to Church regularly by
my mid-twenties. I then began exploring other religions, such as
Buddhism and later, Paganism and Wicca. Wicca is first and
foremost a religion with magickal practice, albeit important,
secondary to the worship of the Lord and Lady. As a Witch, I
believe in reincarnation and that the soul will eventually return to
the divine–like a drop of rain that eventually returns to the ocean.
Through the 2013 Philadelphia Pagan Pride Day, I learned about
Sacred Crossroads Coven which was close to my home. In the
fall of 2013, I attended Lady Kaleah’s Wicca 101 and dedicated
myself to the Lord and Lady on the final class. After taking Lady
Kaleah’s more advanced course on British Traditional Witchcraft
and attending Open Rituals at the Inner Path, I decided that Gardnerian Wicca was the path for me. I was initiated
into the coven on Imbolc of 2015. Of course, that was just the beginning of my magickal spiral path to the Lady and
Lord and the Source. I also study astrology, especially evolutionary astrology, as well as the Tarot. Blessed be!